NATO REBELS KILL EACH OTHER OUTSIDE BANI WALID 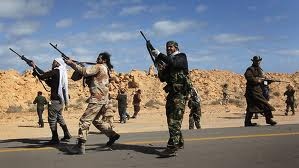 Reports from the ground depict scenes of chaos outside the town of Bani Walid, witnesses claim that NATO militiamen and Mercenaries are once again fighting each other, many fighters have been shot, and one fighter’s head have been blown off by an RPG.

This comes as fighting intensifies in the Capital, scenes of heavy fighting and explosions have been reported, also reports that Libyans have raised the Green flag over the Green Mountains in the east. Scenes of celebrations were posted in Tarhuna as reports suggests that the town have been liberated by its own people.

A new hole in the propaganda matrix END_OF_DOCUMENT_TOKEN_TO_BE_REPLACED
This entry was posted on Wednesday, September 21st, 2011 at 13:44 and tagged with libya, NATO, Rebels, war and posted in Libya. You can follow any responses to this entry through the RSS 2.0 feed.
« NATO REBELS RECEIVED ANOTHER DEVASTATING DEFEAT IN SIRTE
‘YOU ARE NOT MY BOSS.’ NATO REBELS FLEE FIGHTINGS IN CHAOS, LIBYA »