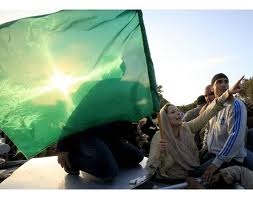 National Transitional Council militiamen deployed a three-car convoy into Bani Walid only for it to be destroyed in an ambush that claimed at least four NTC fighters.
Fighting is also raging around Sirte.
Dr Ahmed Alsharif, who heads a field hospital near the city, said that at least 80 NTC fighters had been killed there since Saturday.
Militiamen loyal to the National Transitional Council have been besieging both towns since August.
Nato warplanes have repeatedly blitzed the defenders’ positions.
But the main NTC military force were forced into a headlong retreat from Bani Walid on Friday.
Now the front line is made up of bands of undisciplined fighters.
Western journalists near Bani Walid reported that NTC-allied fighters as young as 18 were spending hours smoking cannabis, shooting at plastic bottles, arguing with one another and sometimes just firing wildly into the streets out of apparent boredom.
In Benghazi today NTC chief Mahmoud Jibril told a press conference that the council had failed to reach an agreement on an interim government due to bickering over positions.
He had promised over a week earlier that a new administration would be announced within seven days.
nGadaffi spokesman Moussa Ibrahim claimed on Sunday evening that Gadaffi partisans had captured 17 mercenaries including fighters from Britain, France and Qatar.

A new hole in the propaganda matrix END_OF_DOCUMENT_TOKEN_TO_BE_REPLACED
This entry was posted on Monday, September 19th, 2011 at 21:33 and tagged with Bani Walid, libya, NATO, Rebels, TNC, war and posted in Libya. You can follow any responses to this entry through the RSS 2.0 feed.
« LIBYA: REBELS RETREAT IN FACE OF HEROIC RESISTANCE BY LIBYAN GOVERNMENT FORCES
LIBYAN REBELS FIGHT EACH OTHER FOR POWER »